WAYS YOU CAN GET INVOLVED:


To learn more about SEP or to take the SEP Training Program, click a link below.
Safe Environment - English      Ambiente Seguro - Espanol

OUR HISTORY:
In 1891, the largest shipbuilding dock on the west coast was established at Dockton, Vashon Island. As Croatian immigrants came west, a number of these families settled in Dockton to work in the industry. They brought with them their Catholic Faith. Thus it was at Dockton that the Vashon Catholic Church had its beginnings.
On Labor Day in 1921, a pioneer priest, Fr. Herbert Mertens, traveled to Dockton to offer the first Mass at the home of Mr. & Mrs. Theodore Berry. He came thereafter once a month to care for the spiritual needs of the fifteen Catholic families.

Fr. Mertens was apparently pastor of St. Nicholas Church in Gig Harbor, Washington, but was determined to see to the welfare of the Dockton Catholics. In a letter to Mr. Berry, he stated, "Up and at it - no rest until the Lord is served in Docktion!" Soon, with the population growth, the need for a apermanent church building was crecognized. The sum of $2,400 was needed for building. The construction of the Dockton church came from contributions and social parties. Contributors included summer resident Mr. Patrick Heney, President of Pembroke Investment Company of Seattle. In recognition of his sizable donation, the church was named for his patron saint. The church of St. Patrick, Dockton, was dedicated on June 23, 1923.

Fr. Richard Kreutz succeeded Fr. Mertens until 1932, when Bishop O'Dea gave care of the Mission to the Jesuit Fathers of Bellarmine in Tacoma. It was then that regular Sunday Mas was offered on the island. As Vashon and Maury Islands' populations increased, there were a number of new Catholic families. The Holy Names Sisters were often on the Islands to give religious instruction to the children. The original fifteen families in 1923 grew to twenty-six in 1935 and thirty-three in 1940 when the Mission was canonically attached to Holy Family Parish in West Seattle. St. Patrick Church could no longer contain the faithful in the 1940's and it became necessary to enlarge it. Between 1923 and 1949 the St. Patrick Guild sponsored many socials, the proceeds from which were set aside for future needs. Funds were also raised through subscriptions. In 1950, when there were ninety-two families, the church expanded to hold the booming population. Acting somewhat independently, the remodeling was started and accomplished primarily through the volunteer efforts of Mr. Theodore Berry. Non-Catholics Mr. and Mrs. Alfred Johnson also contributed land on this occasion and subsequently in 1960. The construction cost $15,827.11 and it was at that time that the church bell was added. The bell was formerly the Dockton dry dock bell that had been used to call men to the dock when a ship came in for repairs.

Most of the Catholic families of Vashon lived in Dockton, but with the advent of Island roads and a good ferry system to Seattle, the greater population was now centered in the north end and mid-island. Suburban families who commuted daily to and from Seattle gradually replaced the picturesque fishing fleets of the historic past. Thus, on July 5, 1949, Fr. Paul Buchanan was granted permission to offer Mass in the scout cabin on Vashon that also proved to be too small. Services were transferred to the Vashon Island Club House. For the next fifteen years the club was the "Vashon Church". Fr. James Buck was the first resident priest from 1956-1960.

The Archdiocese of Seattle purchased the current church property from Massa Mukai in 1953. At that time, there was a lot of discussion about a potential bridge being built connecting Vashon Island to the mainland. This would have brought with it a population growth to support a Catholic school and the need for a bigger church. In September 1961, planning for a new church and school began to take shape and an architectural firm was engaged to draft plans. In May 1962, the pastor, Fr. Victor Cloquet, was given permission to remodel the former Mukai home to be used as the parish rectory. On September 19, 1962, St. John Mary Vianney was dedicated as the name of the new church. The groundbreaking ceremony was held on July 7, 1963 and the new building was completed on May 1, 1964. The first Mass celebrated on the feast of the Ascension, May 7, 1964. The Parish seat was officially transferred from St. Patrick's, Dockton to St. John Vianney, Vashon on July 12, 1964. At this time, one hundred-eighty families (numbering around five hundred-fifty people) were served, augmented by a sizable number of summer residents each year.
The completed building was intended to be the cafeteria and gymnasium of a school. The plan was to finish building a school and the actual church, but to hold Mass in this new building temporarily during the construction. However, since the plans for a bridge never came to fruition, there was not the increase of population and, therefore, not enough support for a Catholic school. In 1995, a Capital Campaign was conducted so the building could be remodeled to its current design. It has the same footprint as the original building, but the cafeteria is now our Social Hall and what was the gymnasium has been reconstructed for our Sanctuary.

Over the years, the grounds have been developed by parishioners to include serene places of worship and meditation such as the Memory Garden, the Stations of the Cross, the Rosary Garden with its beautiful statue of Mary and the grassy area and lovely spiritual artwork that can be seen from inside the church through the altar-side window.

We of the present Catholic community of Vashon-Maury Islands remember with love and gratitude those who came before us as a generous and industrious force in our lives. The church has continued to flourish with our parish family ever changing yet remaining not just as a building in which to worship, but, as a place to enjoy fellowship and to develop and practice our Catholic faith. 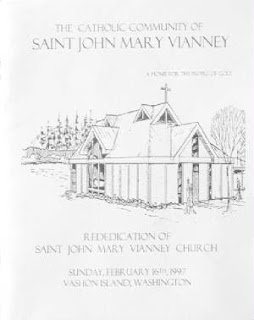 It has been our good fortune to have many dedicated priests since Fr. Cloquet including Fr. Stanton Boyle, Fr. Lawrence Low, Fr. Patrick Clark, Fr. John Koehler, Fr. Armando Guzman, Fr. James Meehan, Fr. Anthony Bawyn, and Fr. Ross Fewing to serve our needs as a parish. Pastoral Life Director David Giusti ran the parish during the remodel of the sanctuary and Fr. Richard R. Roach, S.J., Ph.D. was pastor from 1998 until his death in November of 2008 and was followed by Fr. Marc Powell . We are truly blessed to have at this time as our spiritual teacher, pastor and friend, Fr. David Mayovsky.

As you read this abbreviated account of our parish history, remember you are not just a reader, but are part of the history. In the words of Fr. Victor Antone Cloquet, "We came, and after we have played our part on the stage of life, others will come. Long after we are gone the Church will be here. It is timeless, like the ever-changing tides that lap our shores."
May God look with benevolence and love on the priests and parishioners of St. John Vianney Church, Vashon Island, as we continue forward on our Catholic faith journey.

"THE CHURCH IS FAVORED, THE DWELLING PLACE OF GOD ON EARTH:
A TEMPLE BUILT OF LIVING STONES, FOUNDED ON THE APOSTLES
WITH JESUS CHRIST ITS CORNERSTONE"-FROM THE PRAYER OF DEDICATION
1997 Rededication Ceremony

Livestream not available on Chrome, please go directly to our Facebook page 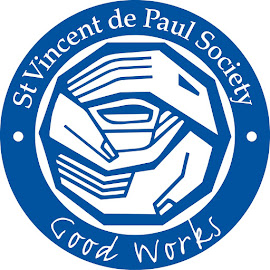 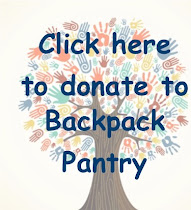